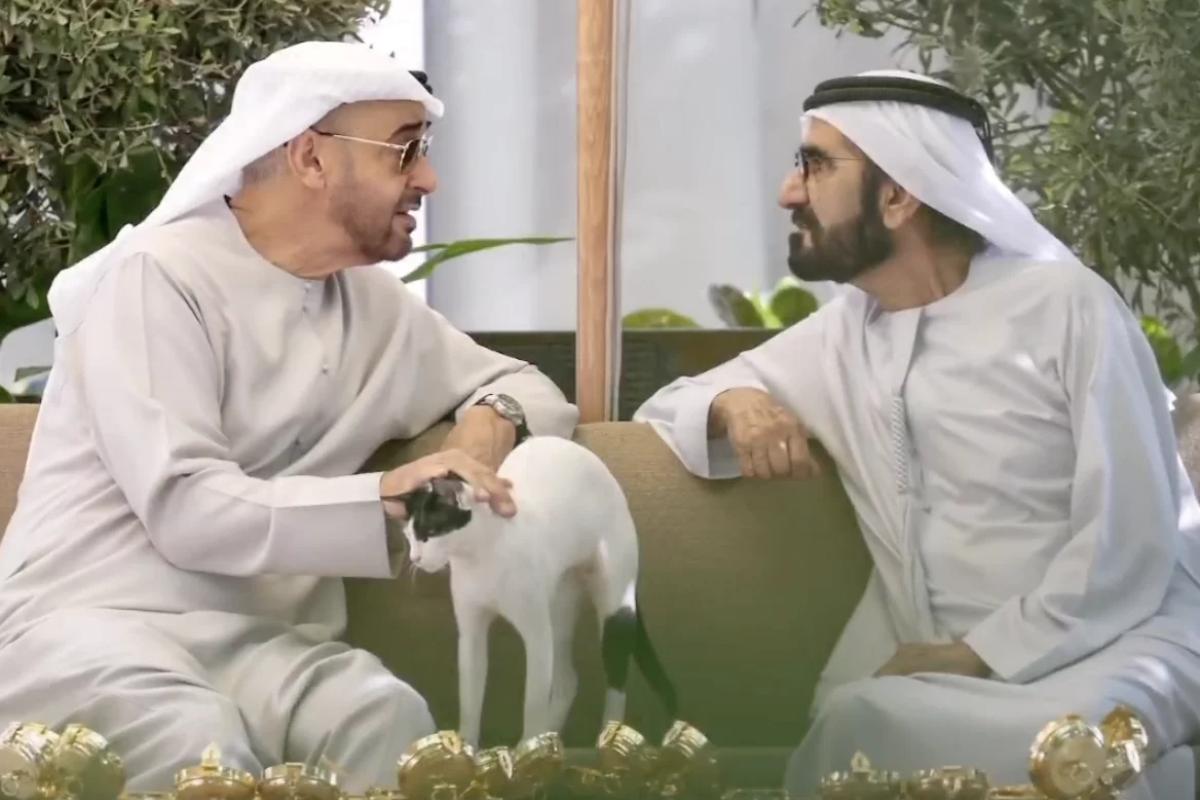 Did You See the Cat Among the UAE Rulers? Has a Malayali Touch, How did it Reach the Palace

Dubai: A video of UAE rulers on a bench is now viral on social media.  Videos of the rulers of the country come out every now and then but there is another reason behind the new video going viral.  A cat sits as UAE President Sheikh Mohammed and Vice President and Ruler of Dubai Sheikh Mohammed bin Rashid speak.

The question arises as to how that ‘royal’ sitting cat got there.  There is a Malayali touch behind the cat’s arrival here.  The interesting incident is like this…

The video has gone viral on social media as if you have seen the kitten that is seen among the rulers while discussing the important issues of the UAE.  Anyone watching the video will have this question in their mind.  Not only this cat, but also the cat’s mother has been in the media in the UAE before.  The reason for that was the Malayalis.

A video went viral in August 2021.  The video shows a pregnant cat stuck on top of a building and being rescued by some expats.  Noticing this, the Ruler of Dubai honored the expatriates with a gift.  Malayalees rescued a cat trapped on the second floor of a building in Deira that day.

The pregnant cat was rescued by RTA bus driver Naseer Muhammad from Kothamangalam, Abdul Rashid from Vadakara, Kozhikode, Ashraf from Morocco and Atish Mahmood from Pakistan.  These were honored by Sheikh Muhammad bin Rashid.  They received 50,000 dirhams as a gift that day.

I have no words.  A year has passed since that incident.  I feel so happy.  This kitten is just like the cat we rescued that day… says Rashid.  Sheikh’s office staff had taken the cat that day.  Rashid said that he is happy that the ruler is protecting its baby even today and wants to see the cat in person.

The importance Dubai rulers give to birds and other living things has been in the news before.  The incident was reported in 2020 by the ruler of Dubai, an inspiring response to rescuers and helpers of distressed birds.  Journalist Rawla Al Khatib, who saw the crippled bird, informed the authorities.

The municipality authorities asked to WhatsApp the location of the bird.  Roula did the same.  Officers arrived moments later and took the bird away for treatment.  Raula also shared this on social media.  Sheikh Mohammed tweeted thanking Rawla.  Sheikh Muhammad’s words were that Allah will show mercy to those who show mercy to those on earth.