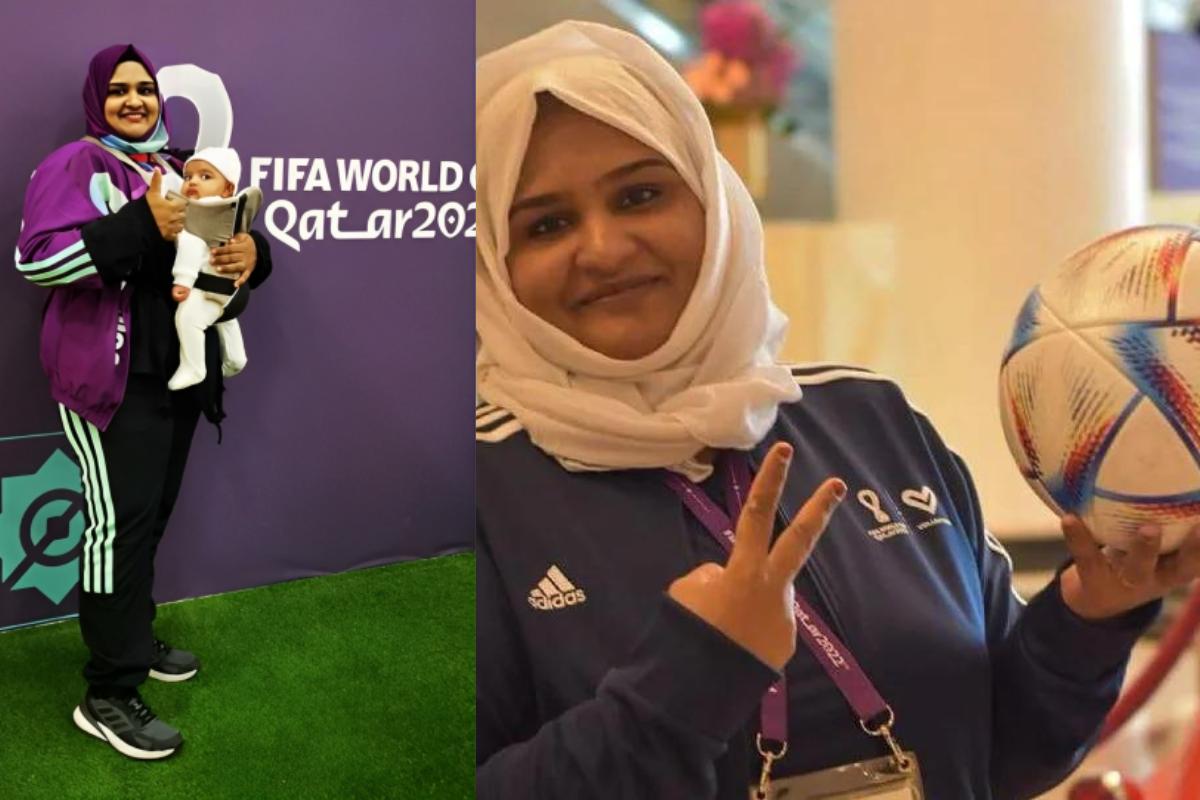 This is Nabsha, Mother of 3 Children; World Cup Volunteer with Baby, Malayali Young Woman Who Achieved her Dreams!

Doha – Nabsha, a 37-year-old mother of three children, has proved through her own life that dreams are not enough, but if you have the determination to overcome difficulties and achieve them, you can achieve positivity and the energy to move forward when your dreams come true.

Nabsha, who holds her own three-month-old baby close to her chest not only in the kitchen but also during her official work, is an inspiration and role model for all women to move with strength in any situation.  Nabsha, who is active in volunteering with her baby in Qatar, full of football enthusiasm, is the most beautiful sight in the FIFA World Cup.

Nabsha Tattiparampil, a native of Malappuram Valancherry and a teacher in Qatar, is one of the Accreditation Leaders at the main media center for the FIFA World Cup.  A love for service activities right from school-college days is behind the desire to become a volunteer in tournaments.  Nabsha says that voluntary service is a satisfaction for the mind and more than that it is a wake-up call and energy for the mind and life.  Nabsha’s success lies in asking why I can’t instead of I can’t.

Supportive family and colleagues
She resigned as a school teacher for the time being and became active in volunteering.  The joy of being pregnant came days after she started serving as a volunteer in the Arab Cup in 2021.  Nabsha was not ready to postpone her desire to become a volunteer because she was pregnant.  Despite being well aware of the health problems during pregnancy, Nabsha overcame all of them and participated in the FIFA Congress and the World Cup volunteer selection interview panel (Pioneers).

Her husband Mujeeb Rahman, who is a Qatar Energy official, her children, 13-year-old Nashwa Mujeeb and 10-year-old Shaan Rahiman, and all the authorities and colleagues in the volunteering sector supported Nabsha.  Nabsha interviewed more than 500 people in 41 sessions during the two-month long volunteer election.

It is during 8-9 months of pregnancy.  But Nabsha says that she did not feel tired because her colleagues stood by her with support and shade to overcome the difficulties.  After doing volunteer service until two days before giving birth, Arva gave birth to a beautiful little girl named Irene.

From the Arab Cup to FIFA
By the time the volunteer service started at the Arab Cup and reached the FIFA Congress and reached the World Cup, a little beauty named Irene also joined her mother.  Nabsha took part in the rehearsals conducted by the Supreme Committee officials on how to reach the stadium, accommodation and fan zones for the fans when they arrive in the country, whether they will be satisfied with the facilities provided, what difficulties they will face and how to solve them.

Nabsha’s determination to make her wishes come true was not only the care of those who were with her, but there were no difficulties even when she had to travel in 10 zones for a whole day.  When asked if breastfeeding the baby during work was not a problem, Nabsha replied that with the care, love and support of her colleagues, Ireen never had to bottle milk even once.

Nabsha’s answer is that instead of wasting time for rest, Nabsha should change her life positively by taking part in the big event called FIFA World Cup.  In Nabsha’s language, ‘Positive Energy’ which gives life strength and determination is the weapon to make dreams come true.

A Passionated & SEO Based Experienced Techncal & Blog Content Creator and Review Writer from Tirur , Kerala.
Previous 1400 buses sold at once! Ashok Leyland made a huge deal in UAE, did you hear the contract amount?
Next Father Netherland, Mother Brazil, Daughter Portugal ; Malayali family in football passion